The world’s first wearable device designed to boost language development in babies and young children launches in the UK today.

Created by VersaMe, the Starling is a small, smart device with an accompanying iPhone app that counts the number of words young children and babies hear and say each day.

Even before children can verbalise thoughts, their brain is busy processing language. With 82% of brain development taking place before the age of three, their most formative education begins long before reception class.

Countless research has shown that children learn language based on how much their parents, other children and adults talk to them. The more words heard from birth to age four, the sooner that child will learn to talk and read. Yet studies show that some children easily fall 30 million words behind their peers by their fourth birthday.

This is where the Starling comes in. For the first time, parents can track the number of words their baby hears and, eventually, says. By getting feedback, parents can improve the quantity and quality of their verbal interactions ensuring their child is on the path to greater success. As little as 10 minutes of extra talk per day can make a huge difference to development.

How does it work?

Starling has been carefully designed to suit newborns through to four-year-olds. It is a small device that can be clipped to children’s clothing or attached to baby gear. It weighs no more than a packet of gum, is made of medical grade plastic and, as it’s built for children, is water, vomit and dribble resistant.

With a rechargeable battery that lasts up to four days, the Starling uses advanced proprietary algorithms to count the number of words spoken. An activity light on the front signals the level of engagement in real time.

The data is then transferred to an accompanying app via Bluetooth Low Energy to give more detailed feedback. The app also offers tips and activities to help parents increase their engagement. It also allows users to set word count goals and monitor progress.

VersaMe, the company behind the Starling, was founded by three Stanford graduates – Nicki Boyd and brothers Chris and Jon Boggiano. Dedicated to improving education through technology, the team is passionate about changing the notion that education only starts in nursery.

The Starling is available for pre-order from www.versame.com at £149 and will ship in August 2016. Parents, grandparents, caregivers and family friends can use the intuitive, child-safe Starling to engage in a meaningful way with the children in their life while helping improve their intelligence before they ever get to the classroom. 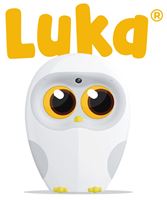