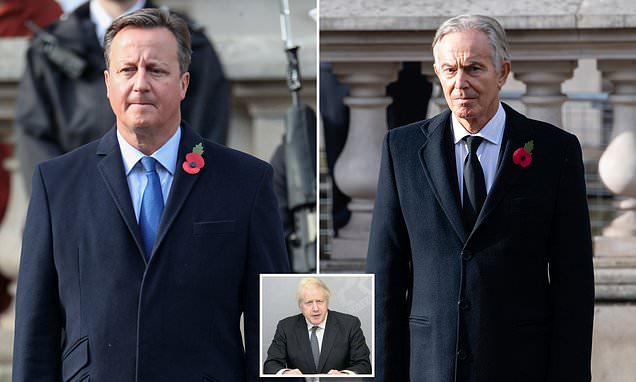 David Cameron said Boris Johnson's rumoured plan to cut Britain's foreign aid spending by £5billion would be a 'moral, strategic and political' error - while Tony Blair has slammed the proposals as 'a profound strategic mistake'.

Britain currently sends 0.7 per cent of its gross national income out as foreign aid to support developing countries around the world.

But Chancellor Rishi Sunak is said to be pushing for the proportion of foreign aid to be cut to 0.5 per cent - saving around £5billion.

David Cameron (left, during the National Service of Remembrance) said Boris Johnson's rumoured plan to cut Britain's foreign aid spending by £5billion would be a 'moral, strategic and political' error - while Tony Blair (right) slammed the proposals as 'a profound strategic mistake'

In a joint statement published in the Daily Telegraph, Mr Blair and Mr Cameron said the 0.2 per cent cut could risk distancing Britain from President-Elect Joe Biden before the 2021 G7 summit - which the UK will chair.

Mr Cameron said: 'Abandoning the 0.7 [per cent] target for aid would be a moral, strategic and political mistake.'

He believes it would break Britain's humanitarian pledges, weaken the country's role as a global leader and could hinder the UK's position in the G7 summit next year.

Mr Blair said changing the budget would be a 'profound strategic mistake' claiming the budget is about 'enlightened self-interest' and not charity.

He said Africa - a recipient of the UK aid - is a key strategic player in the global battle to control coronavirus, combat climate change and tackle extremism.

In 2005, Mr Blair first promised the UK would hit the 0.7 per cent foreign aid target.

In 2013 - under Mr Cameron's premiership - the target was hit and it became law two years later.

In a joint statement published in the Daily Telegraph , Mr Blair and Mr Cameron said the 0.2 per cent cut could risk distancing Britain from President-Elect Joe Biden (pictured) at the next G7 summit - which the UK will chair in 2021

Chancellor Rishi Sunak reportedly wants to temporarily reduce the UK's aid commitment from 0.7 per cent of gross national income to 0.5 per cent. Housing Secretary Robert Jenrick today did not dismiss reports that the Government is considering the cut

Earlier this week, Mr Johnson signalled his intention to slash Britain's foreign aid budget to help the nation's domestic finances - as he agreed to pump billions more into the Armed Forces.

The aid programme has drawn criticism in the past over some of the projects it has chosen to support which have included allocating cash to protect pangolins in China.

Speaking via videolink during Prime Minister's Questions on Wednesday, the PM declined to reject reports of plans to slash the UK's commitment to spend 0.7 per cent of national income on overseas aid to 0.5 per cent in next week's spending review.

It came amid reports that he has over-ruled the Treasury and Rishi Sunak to agree a funding deal for the military that will see its budget increase by £14.5bn over the next four years.

Projects funded by cash from Britain include a campaign to save pangolins in China, which has seen its share of Britain's foreign aid rise by millions of pounds in recent years

The Chancellor is due to present a coronavirus-flavoured spending review next Wednesday which will set out the Government's priorities to get the economy back on track.

At Prime Minister's Questions, Mr Johnson was asked by Labour MP Anna McMorrin to distance himself from reports of the aid cut and 'stop this retreat' from the global stage.

But he replied: 'I think everybody in this country can be immensely proud of the massive commitments this country has made and will continue to make in tackling poverty and deprivation around the world.

'I think they can be even prouder of the commitment that we're now making, leading the world, to tackle the threat of climate change.'

Communities Secretary Robert Jenrick earlier said it is 'legitimate' to look for savings at a time when the public finances are under 'huge strain'.

Downing Street has said the Government remained committed to supporting the world's poorest people but acknowledged that officials were looking at how the aid budget was spent.

The UK has previously said it would be cutting its global aid budget by £2.9 billion this year due to the economic hit of the coronavirus crisis, but that the 0.7 per cent commitment towards international development would still be met.

The spending on Official Development Assistance was set to be £15.8 billion this year before the Covid-19 crisis emerged.

At Prime Minister's Questions on Wednesday, Mr Johnson was asked by Labour MP Anna McMorrin to distance himself from reports of the aid cut and 'stop this retreat' from the global stage

According to The Times, Boris Johnson wants any cut to the 0.7 per cent target - first adopted by the Tories under David Cameron as a signal of the way the party had changed - to last no longer than a year.

Senior figures including Ben Wallace, the Defence Secretary, have been touting the need for a high-tech revamp, including drones

Meanwhile more money will be poured into military spending, the Times reported today.

It claimed that Mr Johnson had agreed to a four-year plan for the Armed Forces.

Senior figures including Ben Wallace, the Defence Secretary, have been touting the need for a high-tech revamp, including drones.

Mr Sunak had been reported to be pursuing a one-year settlement for defence worth £1.9billion as part of the spending review.

The review, which was paused in April as the coronavirus crisis took hold in Britain, will 'define the Government's ambition for the UK's role in the world and the long-term strategic aims for our national security and foreign policy.'