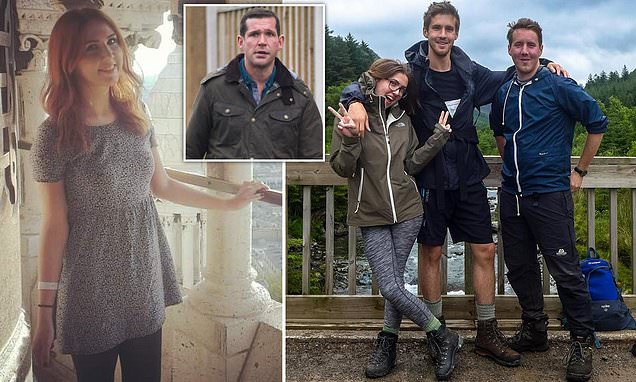 An architecture graduate whose mental health 'took a dramatic turn for the worse' when his sister was killed by a dangerous driver took his own life on a golf course, an inquest has heard.

Stephen Thurm was found dead at the Dunham Forest Golf Club and Country Club in Altrincham on February 5 last year.

The first day of an inquest into his death yesterday heard the 32-year-old had suffered with depression and anxiety since adolescence.

But when his sister Helena, 25, was knocked down and killed as she crossed a road in June 2016, Mr Thurm's mental health deteriorated significantly, an inquest heard.

The driver of the vehicle, Glenn Wall, was later jailed for causing death by dangerous driving.

Mr Thurm's sister Helena, 25, was knocked down and killed as she crossed a road in June 2016, Mr Thurm's mental health deteriorated significantly, an inquest heard.

The inquest heard that months later, in December 2016, Mr Thurm attempted to take his own life in the Hilton hotel in Manchester city centre.

The attempt left Mr Thurm, an Altrincham Grammar School and Nottingham University student, in an induced coma and when he recovered he was sectioned.

It was one of several times he was detained under Mental Health Act in the following years.

Speaking about the impact of Helena's death, his mother Sandra Thurm told the inquest: 'He was withdrawn, he isolated himself a lot more, he was aggressive, he was angry... he just seemed to lose his zest for life.'

Mrs Thurm said: 'We were floundering. It was compounded by our daughter's death.

'The impact on our mental health was tremendous. It was overwhelming. My husband was suffering from post traumatic stress disorder.

'I had never had mental health issues before but because of the traumatic events, I was totally unprepared. It destroyed me mentally.'

After being sectioned Stephen was placed under the care of mental health professionals and prescribed anti-depressants.

But despite treatment his mental health continued to deteriorate, with episodes of 'manic' and 'paranoid' behaviour, the inquest heard.

Mrs Thurm said it reached the point where she was on 'suicide watch' staying up all night to make sure he didn't harm himself.

He was later placed in the 'Red Zone' which meant he received up to three 'contacts' from the mental health team per day.

The driver of the vehicle who hit and killed Helena, Glenn Wall, was later jailed for causing death by dangerous driving.

But the inquest heard he was reluctant to engage with psychological treatment and would often not take his full dose of medication.

She said: 'It was like it was a paper exercise, tick off the box. There didn't seem to be any difference between care plans.

'They were saying what they wanted to achieve but when that didn't happen there didn't seem to be any interventions.'

A post-mortem examination report gave Stephen's cause of death as hanging.

A toxicology report found evidence of prescription medication in his system.

The inquest at Stockport coroners' court is what's known as an 'Article 2' hearing.

It means it can examine whether any arm of the state breached its duty to protect Stephen's right to life. It is scheduled to last for three days.

Speaking at the inquest, Stephen's mum Sandra Thurm said her son was a gifted student and talented footballer, describing him as 'persistent and focused' and 'very competitive'.