Angel Cabrera is extradited from Brazil to Argentina to face assault, theft and intimidation charges 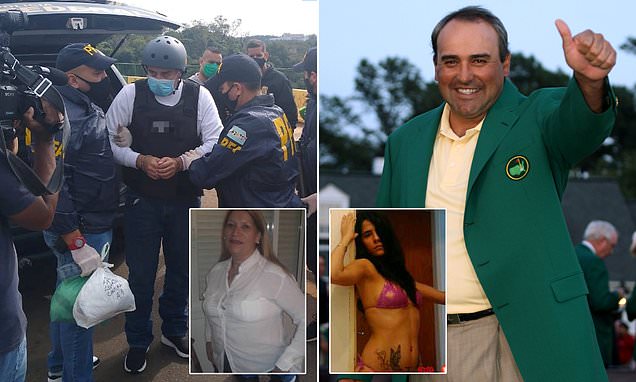 Angel Cabrera is extradited from Brazil to Argentina to face assault, theft and intimidation charges

Argentine golfer Angel Cabrera, a former Masters and US Open champion, has been extradited from Brazil to his home country to stand trial on charges of violence against former partners.

The 51-year-old, who'd been on the run since August last year, was arrested in Rio de Janeiro at the start of the year and transferred into Argentine custody on Tuesday.

A photograph showed Cabrera wearing a helmet and bulletproof vest as he was led handcuffed by police.

Argentine golfer Angel Cabrera is led into custody after his extradition from Brazil and will face charges of assault, theft and intimidation against former partners

His partner Cecilia Torres Mana had accused Cabrera of hitting her in the face, filing an allegation of assault in December 2016.

Two other women, including his former wife Silva Rivadero, have subsequently filed complaints of domestic abuse against him.

According to a police statement, Cabrera faces charges of causing minor injuries, threats and theft said to have occurred between 2016 and 2020.

He went on the run last August after failing to attend a meeting with prosecutors in Cordoba. Cabrera was subsequently placed on the Interpol red list.

Cabrera, 51, went on the run after failing to attend a meeting with prosecutors in August

Laura Battistelli, the prosecutor, said Cabrera would stand trial for the case she was leading on July 1, with other allegations still under investigation.

'He is detained because the court considered that he was evading the trial,' she said.

Cabrera sprung to prominence in 2007 when he held off Tiger Woods and Jim Furyk to win the US Open, the first time a South American golfer had won the Major.

He followed that up in 2009 with victory at the Masters in Augusta and almost repeated that feat four years later, losing in a play-off to Adam Scott.

Cabrera (file photo) is the most accomplished golfer from South America. He won the US Open at Oakmont in 2007 by one shot over Tiger Woods and Jim Furyk

Known as El Pato (Spanish for 'The Duck') because of his waddling gait, he last played competitively in 2020, finishing his career with 52 tournament wins.

Cabrera has one other PGA Tour victory, and his four European Tour wins include its biggest event, the BMW PGA Championship at Wentworth.

He did not play in the Masters when it moved to November last year because of surgery on his left wrist.