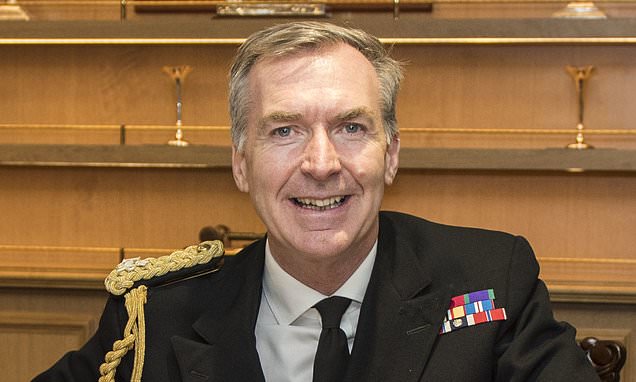 Admiral Sir Tony Radakin, head of the Royal Navy, said that while the underwater graves were protected by law ‘they’re not protected by physical presence everywhere’.

He told The Daily Telegraph: ‘My aspiration would be that in the future... we’ll be using technology to cover either specific war graves, or to cover these large maritime protected areas. The way [we] will cover large tracts of the ocean will be a mixture of surface drones and underwater drones.’

The wrecks of HMS Electra, HMS Exeter and HMS Encounter – sunk off the coast of Indonesia in 1942 – were found to have been looted five years ago.

The ships claimed over 200 lives and should have been protected as war graves.

Admiral Radakin and the Defence Secretary Ben Wallace visited a US military forensic laboratory to wok on identify the remains from past conflicts.

Around 300 British soldiers from the Korean War and 81,700 US military personnel from the Second World War.

But forensic anthropologist and archaeologist Dr Denise To said she is confident her team could identify some of the British soldiers who went missing from the 1950-1953 conflict.

The remains of some soldiers have been transferred to her Pearl Harbour laboratory for identification.

Defence Secretary Ben Wallace said he will see if the Ministry of Defence could assist in the work in any way.

All wrecked Royal Navy ships are protected under the Protection of Military Remains Act 1986.