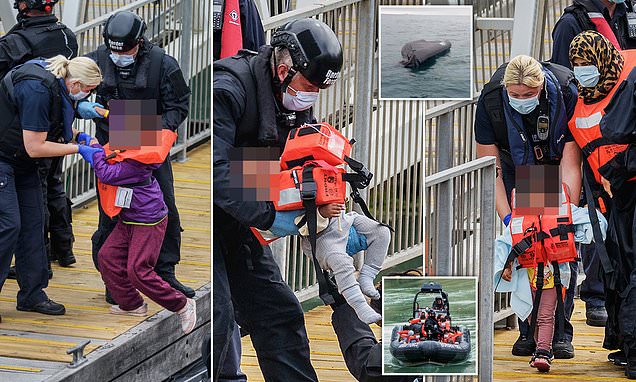 A barefoot child was among the migrants pictured arriving in Dover today after making the perilous crossing from France.

Photos showed Border Force workers helping toddlers in life jackets onto land after they were brought ashore on a department speed boat.

In one image, an infant is being passed from a Border force officer in a boat to another waiting on a dock in Dover Harbour, Kent, as a woman, believed to be the child's mother, waited in the boat.

The arrivals come in a week where hundreds have opted to attempt the dangerous crossing during calm weather.

Despite authorities in France being paid £54million to stop illegal Channel crossings from their coast, 'stretched' officials in Dover are struggling to contain the spiralling fiasco.

However Home Secretary Priti Patel praised the efforts of French authorities, saying in a statement on Sunday:

'French authorities have already prevented over 7,500 migrants entering the UK this year – nearly treble the number for the same period in 2020 – and earlier this week we signed a strengthened agreement to increase police patrols on French beaches, improve surveillance technology and enhance intelligence sharing.

'Since the start of 2020, we have secured more than 65 small boat related prosecutions, totalling over 53 years in jail. This is the result of extensive work by law enforcement and intelligence partners,' Patel said.

Pictured: Arrivals in Dover are seen with Border Force agents on Sunday

'The British public should be in no doubt of our unwavering determination to stop these dangerous crossings from safe EU countries and take down the evil criminal gangs behind them.

'We are utilising all aspects of Government to tackle this issue and our significant actions are having an impact,' Patel said.

On Tuesday, the Home Secretary announced an agreement to more than double the number of police patrolling French beaches.

She added: 'This week, we also saw the landmark Nationality and Borders Bill proceed through Parliament, which will reform the system to make people think again before attempting to enter this country illegally and break the business model of people smugglers.'

On Sunday, footage also emerged showing a small overturned boat drifting in the waters between England and France. The vessel, which appeared partially deflated, was sinking below the surface on one side.

In another video, a large Border Force vessel was filmed transporting dozens of migrants. The men huddle on board wearing face masks, some also have lifejackets on.

Earlier this week, MPs backed sweeping new laws allowing UK authorities to prosecute thousands of asylum seekers who enter the UK illegally, with sentences of up to four years in jail.

The controversial Nationality and Borders Bill will also introduce life sentences for people-smugglers, enable asylum seekers to be processed offshore and give the Border Force new powers to prevent Channel crossings.

However, the measures will not take effect for months as the Bill is not expected to pass all its stages through Parliament until the end of the year.

In another video, a large Border Force vessel was filmed transporting dozens of migrants

Pictured: Men who have crossed the Channel huddle on board wearing face masks, some also have lifejackets on

Amnesty International has criticised the 'reckless and unjust' Bill which it says 'fatally undermines the right to asylum and threatens Britain's reputation'.

The UK Refugee Council also condemned the 'cruel' legislation, which it dubbed the 'anti-refugee bill.' The group said the Bill would unfairly punish 'people who've fled war, persecution & terror for the way they reach the UK'.

The UK argue that individuals should seek asylum in the first safe country they are able to reach, rather than attempting the dangerous Channel crossing.

In her statement on Sunday, Patel said the Bill 'will reform the system to make people think again before attempting to enter this country illegally and break the business model of people smugglers.'

On Thursday, French authorities announced they would restrict the amount of fuel people can buy in an attempt to stop illegal Channel crossings.

A ten litre cap per customer on petrol and diesel in takeaway canisters has been introduced in six districts across northern France.

Bosses at the Pas-de-Calais prefecture hope it will reduce the amount of small vessels making the dangerous journey across one of the world's busiest shipping routes.

Footage showed a small overturned boat drifting in the waters between England and France on Sunday. The vessel, which appeared partially deflated, was sinking below the surface on one side

Many of the rigid hulled inflatable boats use fuel-powered outboard engines to travel along the 21-mile Dover Strait to the UK.

Announcing the restriction in a prefectural decree on Thursday (July 22), a Prefecture du Pas-de-Calais spokesman said: 'The sale and purchase of more than 10 litres of fuel - gasoline or diesel - in transportable containers are now prohibited.'

They introduced it due to a 'growing presence of a migrant population on the coast of Pas-de-Calais wishing to join the United Kingdom' and suggested the prefecture would take 'all useful steps to dissuade and obstruct the organisation of such illegal and dangerous crossings'.

The decree described small motor powered boats are one of the 'main means used by migrants, on the initiative of organized networks, to illegally cross the maritime border between France and the United Kingdom.'

But locals who require fuel for 'professional uses or needs' will be exempt if 'duly justified by the buyer and verified, as necessary, with the assistance of the local police or gendarmerie'.

Service stations, particularly those with automated fuel distribution and pay at pump, will be required to enforce the ban.

At least 1,111 migrants have crossed the Channel on small boats this week, according to Home Office statistics.

It follows a record-breaking 430 arrived in 14 boats on Monday - the most in a single day since the crisis began.

The 2,934 who have arrived so far in July is also a record for a single month too.